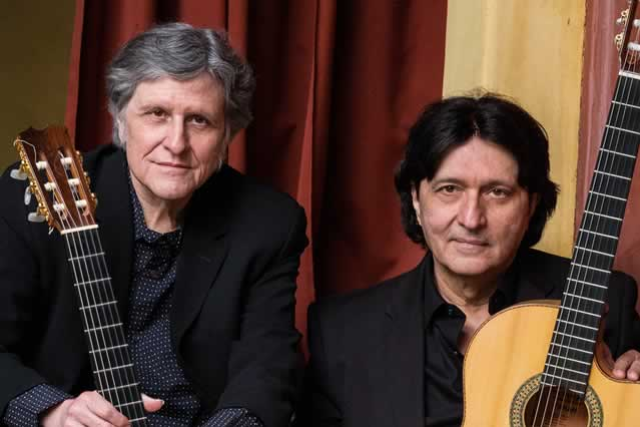 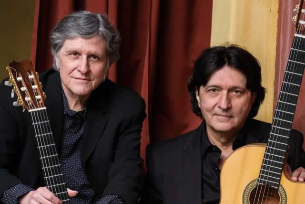 Performing together since 1979, Strunz & Farah are the innovators of an entirely new expression for the acoustic guitar. Well ahead of their time they created an original style that now is widely influential. Originally from Costa Rica and Iran respectively, Jorge Strunz and Ardeshir Farah have brought the musical influences of their native lands into their highly virtuosic, rhythmic, and improvisation-rich original instrumental compositions, inspiring fans and many guitarists worldwide. Their meeting in 1979 in Los Angeles, where they are still based, marked the first time that Latin American and Middle Eastern music, along with other important elements, came together on the guitar. They remain the undisputed masters of the style they created.

Jorge Strunz was born in Costa Rica. Given his first (three-quarter size) guitar at age 6, he grew up also in Colombia, Mexico, Spain, England, Canada, and the United States, studying and playing flamenco and classical guitar. He performed flamenco guitar professionally as a teenager, accompanying Spanish dancers and singers. He later also played electric guitar in numerous rock bands. He then turned to jazz and jazz fusion, and then focused on his own Latin American roots, Caribbean and Latin folk music. Strunz developed an original, lyrical style, and a way of playing guitar that is his own synthesis of hand techniques from flamenco, Latin folk and classical guitar combined with state-of-the art virtuoso linear plectrum playing. In 1994 and in 1998, Strunz received two Presidential awards from the government of Costa Rica for his cultural contributions.

Ardeshir Farah was born in Tehran, Iran. While still a teenager, he moved to England for schooling. He played guitar since childhood, focusing on popular music and improvisation. He has performed and recorded extensively with many of the top expatriate Persian singers and musicians in the US who fled Iran after the Revolution. Farah was the first to use Middle Eastern inflections in a contemporary guitar setting. His distinctive touch has a unique exoticism.

The travels of his diplomat father brought Strunz to the United States, where he studied languages and linguistics at Georgetown University while playing music professionally at the same time, while Farah arrived as a student of architecture at USC, also playing professionally on the side. Farah chanced to see Strunz perform with his jazz-fusion group Caldera (4 albums on Capitol), and was very impressed by the music. Shortly afterwards, when the two guitarists met through a mutual friend, it was readily apparent that their individual styles had a natural affinity, and that their musical goals were similar, notwithstanding their different backgrounds.

They prepared a repertoire, began performing, and recorded their first project, Mosaico in 1980 (self-produced). Although record companies at that time were not ready for this new music, Los Angeles jazz radio embraced it and world/jazz industry pioneer Richard Bock got the duo signed to the prestigious jazz label Milestone for whom they recorded their revolutionary albums Frontera, 1983 and Guitarras, 1984. These records defined world music on guitar years before the “world music” category existed.

Since 1980, they have made 20 albums, 15 of which are studio recordings, including their very popular titles Primal Magic (1990), which topped the Billboard World Music charts, and the Grammy-nominated Américas (1992), Heat of the Sun (1994; top 10 Billboard World Music chart) and Moods and Visions (April 2014), celebrating 35 years of highly successful collaboration, continuing and evolving the duo’s original synthesis of multi-cultural elements into a flowing, melodic and rhythmic acoustic guitar style of the highest virtuosity.

In their performances and recordings (which have sold about a million and a half), one can savor the fruits of one of the most unique yet enduring and harmonious musical collaborations in the world of the guitar.

S&F’s music is perhaps best described as original multi-cultural acoustic instrumental improvisational guitar music, or world jazz. Their music emphasizes and luxuriates in sensuous melody and rhythm with a colorful and passionate expression, and is saturated with their cultural roots. Afro-Caribbean, Latin American folk, flamenco and Middle Eastern music all converge in an essentially jazz context, especially in the sense of improvisation, and is a unique contribution to the diversity of contemporary guitar music.