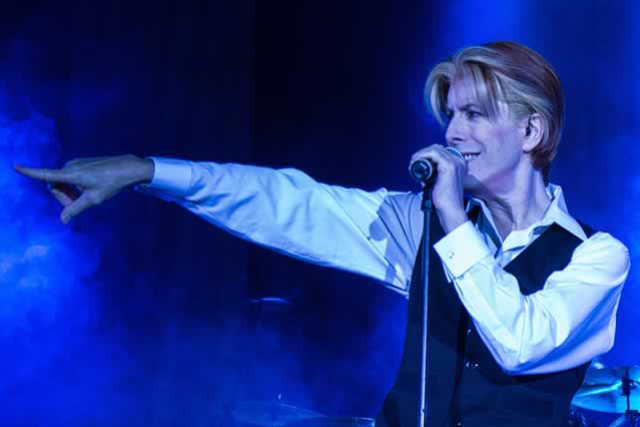 “David Brighton has the voice, moves and look to actually step in for David Bowie...  The band members are not only accomplished musicians, but they have nailed the original arrangements down perfectly.  Experiencing Space Oddity made for a truly remarkable evening.”

"David Bowie worked with David Brighton...What does that tell you about the credibility of a tribute artist?"
- Las Vegas Review Journal 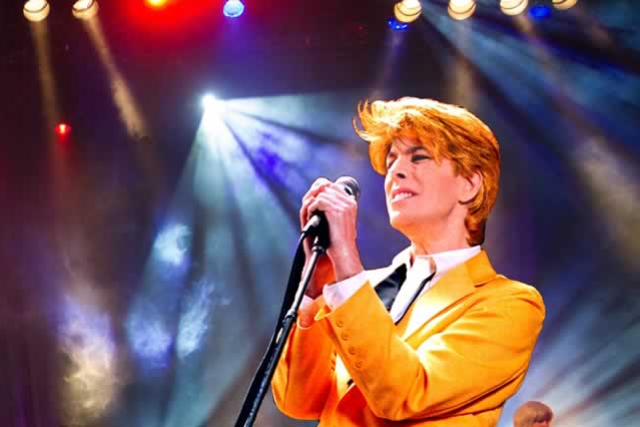 "David Brighton has the voice, moves and look to actually step in for David Bowie if he were unavailable and few would ever know. Experiencing Space Oddity made for a truly remarkable evening…" says Harry Maslin, the Producer of David Bowie's YOUNG AMERICANS and STATION TO STATION Albums.

David's credits include performing side by side with David Bowie himself in the TV commercials for Vittel Mineral Water and for Reality - Bowie's CD. David has performed as a resident cast member of the world famous Legends In Concert - Las Vegas production show. He was cast to portray David Bowie in Warner Brother’s feature film, The Watchmen. He also appeared as David Bowie on VH-1 television as well as in international pop star Shakira's concert video.

David and the Band have been performing throughout the United States, Canada, Mexico, Australia, and Europe – having just returned from touring Finland, Germany, Estonia, Belgium, France, The Netherlands, Spain, Luxembourg, Switzerland, Portugal and Israel…

This full scale stage production is complete with flamboyant costume changes, elaborate staging, perfectly emulated vocal stylings and one of the best backing bands in the business. All of the many faces David Bowie are present… from stadium-sized pop phenomenon, to space-age rock and roll alien Ziggy Stardust… and so is the excitement and electricity.

David began his musical career as a professional guitarist…playing lead guitar with a number of popular recording artists. His stint as a sideman began with a phone call from Kevin Dubrow from Quiet Riot, who tapped David to replace the legendary guitarist Randy Rhoads. He also portrayed George Harrison around the world with a number of the world's top Beatle groups, Including: Rain, The Stars of Beatlemania, The Fab Four, 1964, Twist And Shout, Classical Mystery Tour, and When We Were Fab.

"David Bowie has worked with David Brighton...What does that tell you about the credibility of a tribute artist?" - Las Vegas Review Journal

Paul's original songs have been featured on television and in films, including the Academy Award winning - The Usual Suspects, HBO, Showtime, CBS and ABC. Paul also toured with surf legends Jan and Dean. With Space Oddity, Paul brilliantly reproduces some of rock music's greatest guitar players' feel and sounds (including Mick Ronson, Robert Fripp and Stevie Ray Vaughn) and the vocal stylings of vocalists as diverse as Freddie Mercury (Under Pressure) and Mick Jagger (Dancing In The Street).

Switch is an award-winning guitarist and recording artist from Winnipeg Canada. He studied at the Royal Conservatory of Music before traveling to Hollywood to enroll at the Guitar Institute of Technology. He graduated first class honors where the school dubbed him a "Success Story."  A sought after session and touring musician, Switch has appeared with many major artists, including; Nancy Sinatra, Gene Loves Jezebel, Bay City Rollers and Berlin.

Trent Stroh is a highly respected multi instrumentalist/vocalist who toured and recorded with for six years with Eddie Money. He also toured with the classic acoustic/pop/rock super group America, Nancy Sinatra and pop hit makers, Air Supply. Trent has made numerous TV appearances on ABC, NBC, BBC and can be heard on many commercial jingles as well. Trent's uncanny ability to reproduce the otherworldly bass lines in David Bowie’s music makes him the perfect choice for Space Oddity.

Jennifer Blackwell has an extensive background in voice, music, dance and theater. She has had the fortune of combining her passions of performing and traveling the globe while working for some of the industry’s top companies…. Including: Tokyo Disneyland, Princess Cruise Lines, Disney Cruise Lines and the Hilton Hotel in Osaka, Japan. When she is not touring with this amazing troupe of musician/performers, she can be found performing at the Disneyland Resort in multiple roles, as well as being a facilitator and trainer for the Disney Youth Education Series.

Ryan brings his signature versatility to Bowie's wide ranging catalog. A seasoned, in-demand live and session player, Ryan has toured the world with Frank Zappa’s son  Zappa plays Zappa, and can be heard on recordings by David Bowie, Foreigner, Bo Bice, Clay Aiken, Hannah Montana, Circus Diablo, Nick Lachey, Jesse McCartney, Heather Graham, and Suzie McNeil, as well as many other recording artists. He also played on numerous Hans Zimmer’s movie soundtracks -  including Kung Fu Panda and The Dark Knight. Ryan has made many television and movie appearances as well.