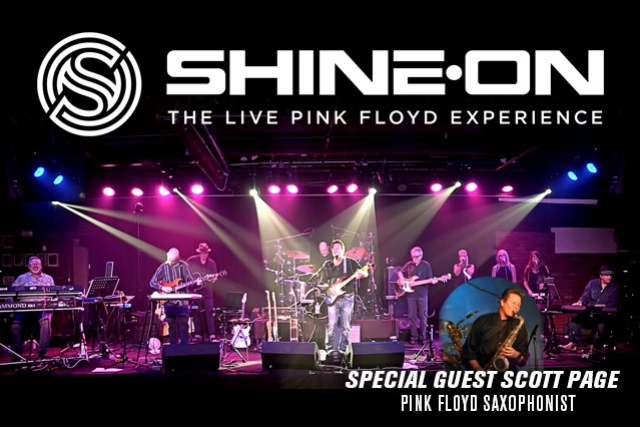 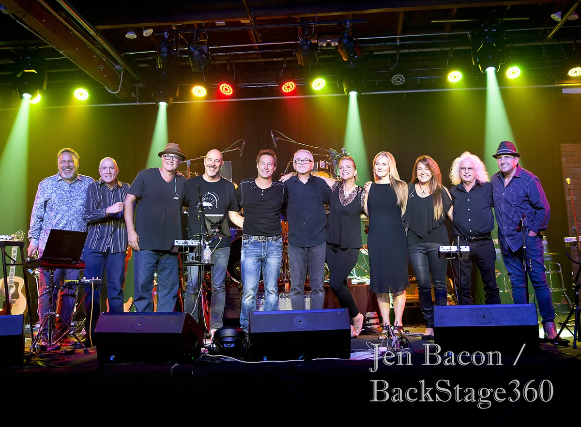 Shine On
Progressive Rock
Donate to SHINE ON - https://www.paypal.com/paypalme/shineonlive

I had the good fortune of attending a Shine On live stream tribute concert presented by Alert The Globe at the Coach House in San Juan Capistrano. When I arrived at the venue the eleven-member ensemble was in the middle of their sound check. My interest was piqued by many guitarists, multiple keyboardists, saxophone player, drummer and several backup singers that filled the decent size stage and to end.

The live stream concert got underway, and almost as if I dropped the needle on to my one-inch grooved Wall Album, “In The Flesh?” flowed out of the concert amps and into my ear eager eardrums. I was immediately impressed with drummer Bill Lawrence who took on the vocal role of Roger Waters. Bill Lawrence’s tone and inflection delivered the same kind of tonality and passion heard from Waters on the original track.

Then the band rolled out “Another Brick In The Wall (part 1)” off the same album. Their lead guitarist Aaron Broering seemed to channel the ethereal intonation of David Gilmour through the strings of his Stratocaster. Shine On didn’t miss a beat. They included the helicopter sound effects that took them into the next song “The Happiest Days Of Our Lives” and on into “Another Brick In The Wall (part-2)” bassist Ray Brezden perfectly delivered the meaty baseline hook of the song. Drummer Bill Lawrence chanted the famous… “Stand still laddie,” with a spot-on British accent. Then keyboardist Barry Hovis pulled out a bull horn and used it to inquire… “how can you have any pudding when you don’t eat your meat?” which genuinely demonstrated the bands dedication to authenticity. The song ended with a smooth transition into Floyd’s “Shine On You Crazy Diamond (part 1-4).” Shine On definitely nailed this one. From the celestial synth into the iconic 4-note arpeggio of the guitar, they purely captured the character of the original. Aaron Broering once again stepped effortlessly into the shoes of Gilmore, flawlessly playing every note and bend with perfect phrasing. Background vocals Dawn Pulido, Liz Bates, and Joni Finkle were spot on and sonorous throughout the piece. But the highlight of the song was the saxophonist, Michael Forbes. Armed with his brass arsenal, a baritone, and a tenor strapped a crossed him like Wyatt Earp heading to the OK corral, Forbes blew the sax solo away. He began with this smooth tempo on the baritone sax. Without missing a beat, he skillfully slid the Bari onto his back and dropped the tenor into perfect position for the end of the solo, including the definitive altissimo finale.

Next, the drummer stood up behind his kit and held the mic in both hands. He belted out the first verse of “Welcome To The Machine.” It was uncanny how much he sounded like Waters. Their rendition varied a little from the original. It was intriguing hearing pseudo Waters on lead vocals in place of Gilmore, but it absolutely worked. Another nice touch was how the background vocalists were incorporated in such a unique way that it added opulence to the song.

To the delight of my inner child, the band played a few songs off the Dark Side Of The Moon album. “Speak To Me/Breathe In The Air” featured guitarist Glen Hall‘s perfectly executed lap steel guitar. Closing my eyes, I was transported back to my youthful dream world. And then jolted by resounding alarm clocks as the band, complete with precise loop effects began the song “Time.” Bill Lawrence did an excellent job on the intro with drum triggers and pads to create the same multi-tuned Tom echoes heard on the album. Again, I must tip my hat to the lead guitarist Aaron Broering for bringing the Gilmore passion to the song. To wrap up their tribute to Dark Side, Forbes appeared again, this time on the Tenor alone, delivering an exquisite solo on the song “Money.” The band then revisited The Wall album playing “Young lust.” I was impressed with keyboardist Robin Canada who did a stellar job laying down some bluesy piano riffs.

The bands 16 songs set spanned several decades of Pink Floyd‘s career. With songs “Keep Talking” and “What Do You Want From Me” from The Division Bell album and “Sorrow off A Momentary Lapse Of Reason. The set was rounded out with “Have A Cigar”, and “Wish You Were Here”, which featured Mike MacLane on a 12 string Guild acoustic guitar and Broering’s scat singing accompaniment. The band end of the show with a perfect rendition of “Comfortably Numb.”

Although the band has performed both Dark Side Of The Moon and Wish You Were Here, in their entirety for their live shows, mainly their performance focus on Pink Floyd as a live band. In fact, they model their shows with the same kind of lineup as Pink Floyd‘s pulse concerts.

It was a captivating show that I enjoyed in its entirety. Shine On delivered it in a big way, superbly creating a genuine Pink Floyd live experience.