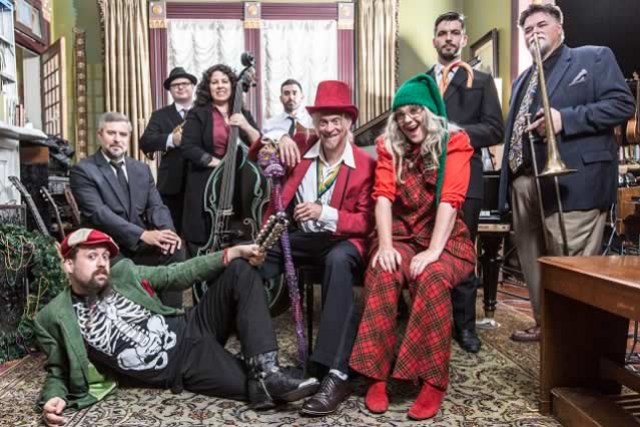 The Squirrel Nut Zippers return to the west coast this December with their joyous, raucous Christmas Caravan tour. Performing songs from their Christmas Caravan and Mardi Gras for Christmas albums as well as other Zippers favorites, the 13-date run will be the first west coast holiday tour since 2018.  The Southern Roots & Swing Revival show is a must-see for any true music lover. "Americana in its truest sense, exploring American musical forms of the past in a thrilling, faithful-yet-irreverent manner.”

SNZ’s most recent album Lost Songs of Doc Souchon debuted in late 2020. It features 10 tracks – a combination of newly-penned Zippers songs, along with a few tunes from past times – and has received acclaim from fans and critics alike.
Prior to Lost Songs of Doc Souchon, their most recent studio album Beasts Of Burgundy was released in 2018 and debuted at #4 on the Billboard Jazz Albums Chart upon its release. It was back in 1998 when SNZ released their first and only Holiday album titled Christmas Caravan, which went on to sell a quarter of a million copies and reached #12 on the Billboard Holiday Albums chart.

SNZ began their musical journey in Chapel Hill, North Carolina, in the mid 1990s, as a musician’s escape from the cookie-cutter world of modern rock radio at the time. Mathus, along with drummer/percussionist Chris Phillips, formed the band as a casual musical foray among friends and family in the area.  It wasn’t long before the band’s quirky mix of jazz chords, folk music, and punk rock leanings spread out of the region and attracted a national audience.

Since reactivating in mid-2016, SNZ have been performing to packed houses across the country and around the world.  As Mathus has said since the band’s re-launch, “it’s not a reunion, it’s a revival.” 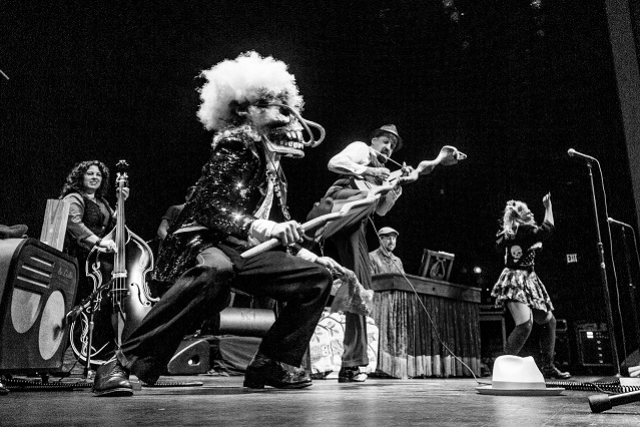 The Squirrel Nut Zippers began their musical journey in Chapel Hill, North Carolina, in the mid 1990's, as a musician's escape from the cookie cutter world of modern rock radio at the time. Jimbo Mathus along with drummer/percussionist Chris Phillips formed the band as a casual musical foray among friends and family in the area. It wasn't long before the band's quirky mix of Jazz chords, Folk music, and Punk Rock leanings spread out of the region and attracted a national audience.

Between 1995-2000 the Squirrel Nut Zippers sold over three million albums. Their watershed album, Hot (1996) was recorded in the heat of New Orleans, fueled by a smoldering mix of booze and a youthful hunger to unlock the secrets of old world jazz. This passion mixed with Klezmer, Blues, Americana and random bits of contemporary music became the bands signature style. At the time, there were few other bands inhabiting this space. The album would eventually break free of any "jazz" stereotypes and land on commercial radio, taking the band to remarkable heights for what was essentially an anti-establishment sound.

Years later and through chronicles of every kind, the band has emerged from a lengthy recording hiatus, reinvigorated, reinvested, and rejuvenated. "It's not a reunion, it's a revival" has been the battle cry for Mathus since reforming the group in 2016. With an all star cast of New Orleans musicians, the band breathed new life in to the old material, and inspired Mathus to return to the studio to reignite the band's unique, enigmatic sound.

The result, is the first Squirrel Nut Zippers studio album in eighteen years titled Beasts of Burgundy. A return to form, the album embraces the city that first inspired the group. Enlisting Mike Napolitano -- who recorded all the bands previous albums -- was a magical first step in the process. "Nappys Dugout," located in the Marigny, resembled the original style and feel of Kingsway, the now gone studio where the Zippers recorded much of their catalog. The Dugout, located in the home of Mike Napolitano and Ani DiFranco, created the perfect environment to inspire the original feeling that so excited Mathus at the very beginning of the Zippers long career.

A long list of songs in hand, Jimbo and violin player Dr. Sick began shaping and crafting the songs that would eventually become Beasts of Burgundy, a handsome moniker referring to Burgundy Street in New Orleans. "The Zippers have always been full of outlandish characters which provide great self referential material for songs" Mathus remarked. "The new revival of the band is no exception and, since we rehearsed the new show on Burgundy St in New Orleans, I thought of this title and story about the 'Beasts' who accidentally miss Mardi Gras."

The album itself heralds the band's mission whilst having a fresh objective of it's own; A hand tailored thrift store suit of songs, stitched into one complete body of material. All drawing from the same well of mystery, dark alleyways, and long forgotten potions of romance, this album weaves together true stories from New Orleans past, along with rollicking barnstormers full of all the usual twists and turns that are the hallmark of the Squirrel Nut Zippers sound.

The first single from the album "Karnival Joe (From Kokomo)" comes directly from Jimbo's interest in carney folk. "I've always been fascinated by Side Shows and Carnival Midways," remarked Mathus. "Karnival Joe was inspired by an obscure recording from Dr. Souchon and from reading about the the old Cayetano Circus Of New Orleans."

The group has spent the better part of the last two years shaping its chemistry and honing its sound on the road, working its way towards this Inevitable conclusion of songs. A kind of uncontrolled experiment in music on the road allowed the band to feed off audiences energy and surrender to the dancing muse, rather than trying to subscribe to a preconceived notion. An audience...a band onstage...both complicit in the desire to defy the world as we know, if only for a brief spell. "Let the music lead," was always Jimbo's motto, and continues to be.

Beasts Of Burgundy is twelve original new songs from the mind of Jimbo Mathus and the Squirrel Nut Zippers. Inspired by the city of New Orleans, the poet Ron Cuccia, and a disregard for convention, the bands latest studio release will be released on March 23rd, on Southern Broadcasting.